The Moon Man in the Rabbit Pajamas

When I see the moon over an attractive Azeroth landscape I usually pause to admire it – and sometimes take a screenshot, as I did here while flying in Azsuna. Gazing at the moon on planet Earth is also a source of pleasure, even of awe, especially when it’s full. For many people it prompts wonder and stories; it can stir romantic feelings and the imagination.

Looking at Earth’s moon, we see the play of light, dark, and gray areas. We can’t see the mountains, highlands, and craters; rather, our imaginations work to form meaningful images. The fancy word for this is pareidolia, a phenomenon in which the brain perceives “a familiar pattern where none exists.” Seeing a face in the moon, generally called the Man in the Moon, is an example of pareidolia.

As a child I was told there was a man in the moon, so I saw one, a whole man, not just a face. The man was wearing rabbit pajamas with long ears, sitting on his bed hunched over reading the book in his lap. Even today this is what I see, despite learning in my teens that my friends saw only a face. I probably said something like this: “You don’t see the man in rabbit pajamas!?” Their response: laughter, followed by weeks of good-natured ridicule. 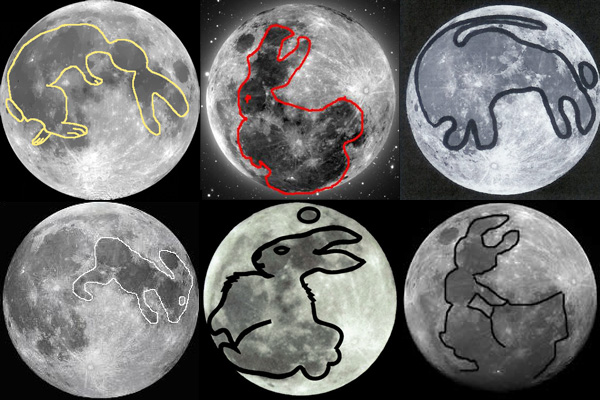 Okay, maybe the rabbit pajamas are a bit much for most people (my husband thinks its hilariously peculiar). But seeing a moon rabbit is not uncommon in many Asian cultures and some indigenous cultures of the Americas. Moreover, how a rabbit came to be on the moon is the subject of folklore. One Buddhist tale, for example, is about a rabbit who had nothing to give a hungry beggar but his own body; to memorialize his selfless sacrifice, the rabbit’s image was engraved on the face of the moon for all to see.

My earliest memories include sitting with my mother on the bed with both of us holding a large book of Mother Goose nursery rhymes. That helps to explain why I see a rabbit-suited man holding a book. But I never had rabbit pajamas, alas 😊.

Can you see the rabbit? What do you see? What do you think of when you see whatever you see on the face of the moon? Sometimes I think of my mother and the gift of loving to read that she gave me. 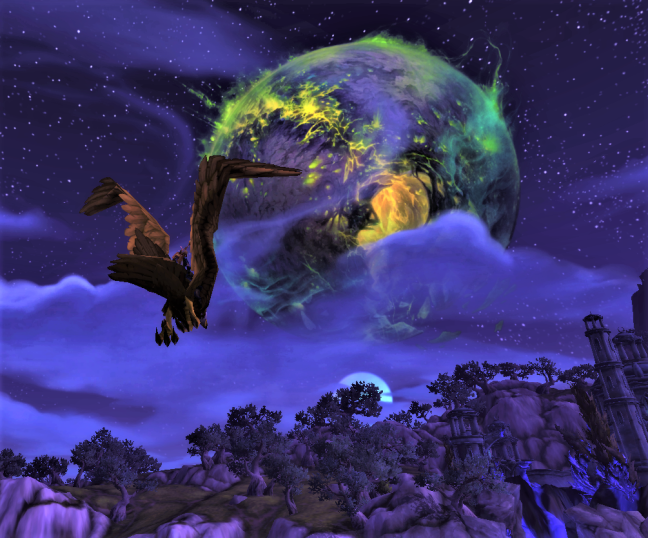 Photo info (in order of presentation): Moon over Azsuna; various ways of seeing the moon rabbit, taken from Kirky’s Kreations blog (what I see is most similar to the rabbit in the bottom right corner); and moon rising over Azsuna with Argus overhead.

I started the blog called "Educating Lotus" in 2011, shortly after I began exploring the virtual world Second Life. With friends I met there, I migrated my virtual life to World of Warcraft (WoW) and joined an educators' guild. Lotus Greene is my gamer name, one I kept when I started another blog in 2015 called "Not Quite Ignored," which originally focused on the lighter side of news and now also includes political news and opinions.
View all posts by Lotus Greene →
This entry was posted in American culture, Virtual Life, World of Warcraft, WoW Snaps and tagged man in the moon, moon rabbit, rabbit in the moon, World of Warcraft. Bookmark the permalink.