I’m enjoying World of Warcraft’s Legion expansion a lot, even now after a year of frequent play. It’s kept me so engaged that until recently I’ve rarely paused to take screenshots (let alone post in this blog). Recently, however, I’ve paused more often and plan to share some of my snaps with you, one or two at a time along with a few comments. Here I begin with a snap I took during one of my first forays into Suramar City. 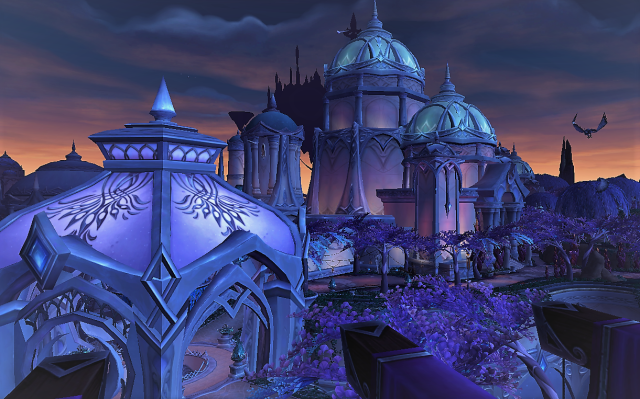 I find that Suramar City is very photogenic in a dark, shades-of-purple way. It’s a beautiful and dangerous place occupied by the demonic forces known as the Legion. Despite the overwhelming evil that permeates the city, it remains enchanting. And now with the gathering of more and more Nightborne resistance fighters, there’s hope that the city will one day return to its former radiance. I work for the Resistance.

I started the blog called "Educating Lotus" in 2011, shortly after I began exploring the virtual world Second Life. With friends I met there, I migrated my virtual life to World of Warcraft (WoW) and joined an educators' guild. Lotus Greene is my gamer name, one I kept when I started another blog in 2015 called "Not Quite Ignored," which originally focused on the lighter side of news and now also includes political news and opinions.
View all posts by Lotus Greene →
This entry was posted in Virtual Life, World of Warcraft, WoW Snaps and tagged Legion, screenshots, Suramar City, World of Warcraft. Bookmark the permalink.