I had an awesome World of Warcraft experience last Saturday, with about 1000 other pink-haired gnomes. We ran all the way from Gnomeregan to Booty Bay then took a ship to Ratchet and ran to the enemy Horde city of Ogrimmar, where guards promptly killed us – repeatedly – while we were trying to reach the enemy Horde warchief’s throne. Some gnomes actually made it and licked him (literally, as if with the tongue). I, however, only managed to sit  on his throne – as a ghost. Even so, the entire journey was great fun and for a worthy cause! 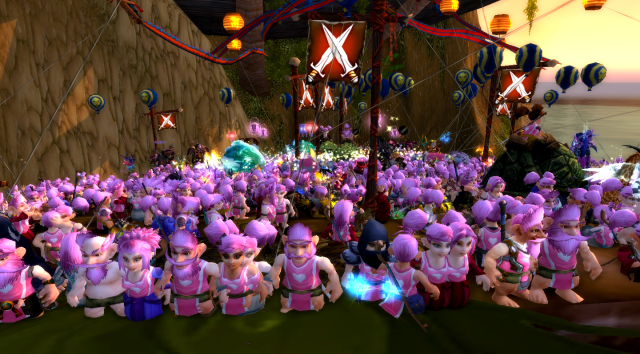 “Running of the Gnomes” on a Booty Bay roof

We pink gnomes were participating in the 5th annual RUNNING OF THE GNOMES, a breast cancer awareness and fund raising event that takes place in the Scarlet Crusade realm. I haven’t seen this year’s tally, but last year the gnomes raised $1305 for the Cleveland Clinic and Tuohy Vaccine research. 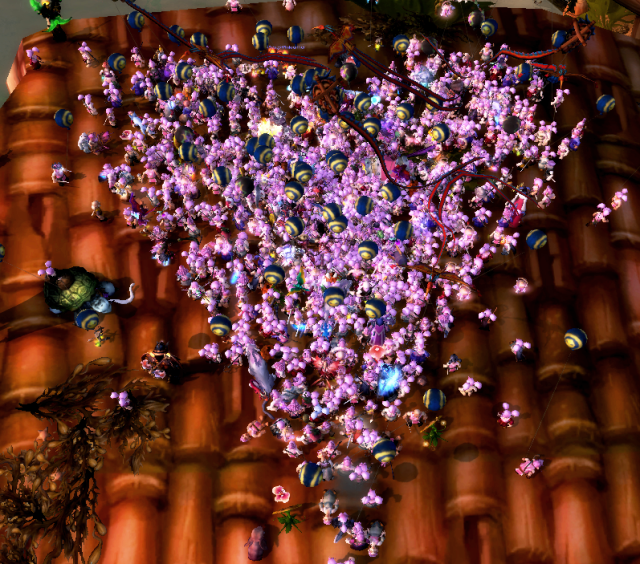 Pink gnomes form a heart and have a heart 🙂

This event got me wondering: What are other gamers doing, as gamers, to make a difference? A lot! I learned during a search. What follows is an annotated list (with links, of course) of nine other charity groups and events organized by and/or for gamers.

2.  RELAY FOR LIFE OF SECOND LIFE is the largest fundraiser in any virtual world, this year celebrating its 10th anniversary with over 3,000 avatars walking to raise money for the American Cancer Society. Like the Running of the Gnomes, this year’s theme is pink: “Making Strides against Breast Cancer across Second Life.” And like the American Cancer Society’s real world Relay for Life, avatars build campsites and walk a track, often in teams. The biggest event this year took place for 24 hours in July, with themed laps, music, and other kinds of activities and entertainment. But events continue to occur in Second Life through the end of October. According to Daniel Voyager’s Blog, last year the Relay for Life of Second Life raised over $390,000 for the American Cancer Society. Awesome!

3. EXTRA LIFE is a group of gamers who help other gamers organize 24-hour game marathons to raise money for the Children’s Miracle Network Hospitals. As its “Play Games. Heal Kids.” page says, participants can play any game anywhere; they gather support from their friends and family, asking each to contribute one dollar per hour of play ($24 total). Since 2008, Extra Life has raised over 8 million dollars – 4 million last year alone with over 40,000 players.

This year’s Extra Life marathon is fast approaching, October 25th. But, with a little noodling through their website, I learned (among other things) that you don’t have to do it that day or do it alone. In fact they recommend team play for keeping up motivation and increasing enjoyment. And team play means fewer hours per person; for example, a team of 4 could play together for 6 hours or could decide to play together for 3 hours on two separate days. See, it doesn’t have to be on the 25th. The Mindcrack Network, for instance, ran an elaborate Minecraft Hunger Games marathon last September and raised, according to this update, over $100,000. And Reddit’s Extra Life gaming marathon is coming up in November.

4.  ABLEGAMERS CHARITY recently celebrated its 10th year of “fighting for the rights of gamers with disabilities to enjoy the same content as everyone else.” Mark Barlet founded it after his best friend lost her ability to play EverQuest. Ablegamers provides reviews and information on video games and accessibility technology and lobbies game developers and publishers to follow its 50-page guide on best practices for making their games as accessible as possible. Individuals can donate, submit content (like reviews), and help with fundraisers like Minethon, a 72-hour Minecraft stream that raised almost $15,000 last August.

5.  CHILD’S PLAY describes itself as “a game industry charity dedicated to improving the lives of children with toys and games in our network of over 70 hospitals worldwide.” Since 2003, it has provided hospitals with millions of dollars worth of age-appropriate games, books, toys, consoles, and other forms of entertainment. It works with hospital staff to set up wish lists and with the game industry, groups, and individuals for donations. For example, today (Oct 17) through tomorrow, FG-2.com is holding its annual fundraiser for Child’s Play, a 24-hour game-a-thon streaming on its twitch.tv site.

Child’s Play is one of four game charities that Extra Credits specifically mentions in its 8 January 2014 animated video, “The Good We Do – Charity in the Gaming Community.” I wasn’t aware of the other three until I watched that episode. I describe these in items 6-8 below, starting with my favorite.

6. OPERATION SUPPLY DROP is “a military gaming 501(c)(3) charity designed to build video game filled care packages for soldiers (America and Her Allies) both deployed forward to combat zones as well as those recovering in military hospitals.” Captain Stephen Machuga founded it in 2010, with the first donation coming from Activision in the form of Guitar Hero bundles and other games. Since its founding, it has raised over a million dollars and has served more than 3000 troops. The organization’s name comes from a line in a Call of Duty: Modern Warfare 3 quest. Its motto is “Making fun where there is none.”

7. PDXLAN organizes the largest LAN parties in the Northwest twice a year, beginning in 2002. For the first several years, these mega-parties (500 plus gamers) focused on fun contests and tournaments. Then charity events were added. According to its website, PDXLAN gamers have gathered over 95,000 pounds of food during the November food drives and have raised over $100,000 for such charities as the American Red Cross, Smile Train, Special Olympics, and Child’s Play.

8. HUMBLE BUNDLE offers “pay what you want” bundles of video games, mobile games, and game-themed books. Sometimes there’s a minimum, like a dollar, but there’s always the motivation to pay more in order to unlock other goodies. When you make a purchase, you choose a charity from those listed, to which a portion of your payment will go. According to Wikipedia, the proceeds from sales “are split between the developers/creators, the Humble Bundle operators, and one or more charities….” Charity choices have included Child’s Play, the American Red Cross, the San Francisco Aids Foundation, and the Human Rights Campaign, among others. A recent post on Giant Bomb notes that Humble Bundle has raised over $11 million for charity since its inception in 2010.

9. DONATEGAMES describes itself as “a charitable organization that leverages video games, technology and innovation to help children and families suffering from cancer.” Entrepreneur Jim Carol founded it after seeing how video games and strangers’ generosity helped his 11-year-old son during treatment for terminal leukemia. Since its inception in 2007, DonateGames has given over $200,000 toward cancer research, donated over 17,000 video games to hospitals and other children centers, and provided direct support to over 100 families who have a child with cancer.

10. WILL FERRELL’S 1ST ANNUAL SUPER MEGA BLAST MAX aims to raise $375,000 for DonateGames and College for Cancer. It’s sort of a raffle, with the grand prize of an all-expense paid trip for two to San Francisco and the opportunity to play video games there with Ferrell on 26 October. The event will be broadcast live on Twitch. It’s too late to enter the contest, but I mention it because it’s yet another example of the ways players are connecting video gaming and giving.

P.S. If you spot factual errors about anything I mentioned in this post, please let me know. If you know about other charitable gamer groups or events, I welcome additions to this list. If you have participated in one or more of these groups or events, please feel free to share your experiences. Thanks! 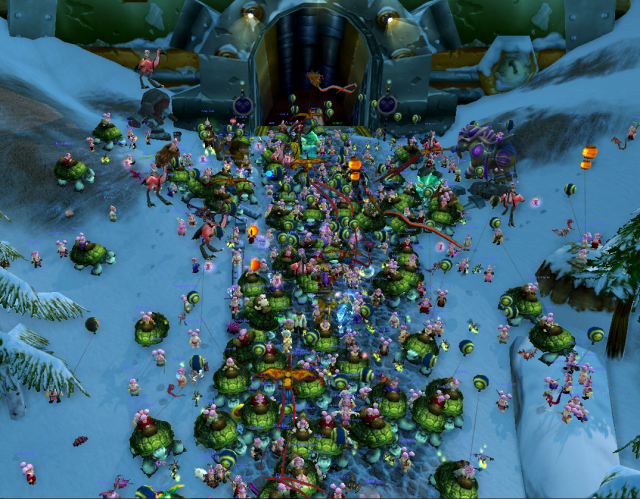 “On your mark, get ready, go!” The pink gnomes begin the run. Why not join us next year?

I started the blog called "Educating Lotus" in 2011, shortly after I began exploring the virtual world Second Life. With friends I met there, I migrated my virtual life to World of Warcraft (WoW) and joined an educators' guild. Lotus Greene is my gamer name, one I kept when I started another blog in 2015 called "Not Quite Ignored," which originally focused on the lighter side of news and now also includes political news and opinions.
View all posts by Lotus Greene →
This entry was posted in Social Justice & Environment, Virtual Life, World of Warcraft and tagged AbleGamers, Child's Play, DonateGames, Extra Life, gamer charities, Humble Bundle, Operation Supply Drop, PDXLAN, Relay for Life of Second Life, Running of the Gnomes, video games, Will Ferrell's Super Mega Blast Max, World of Warcraft. Bookmark the permalink.